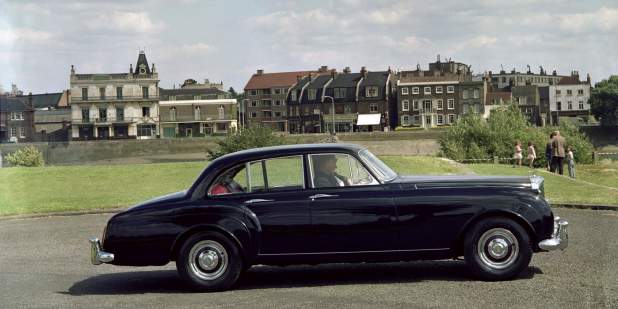 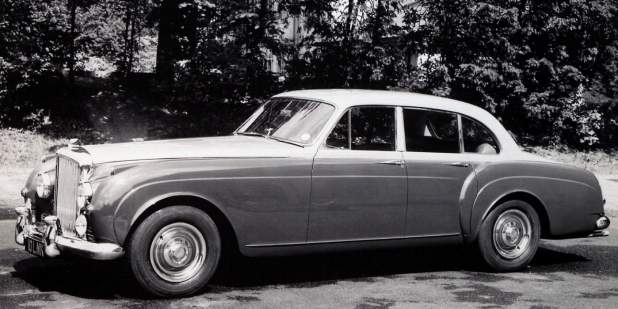 1958 S1 Continental Flying Spur
In 1952, Bentley’s chief designer J.P. Blatchley and engineer Ivan Evernden collaborated on an unofficial project to restore Bentley to the pinnacle of grand touring. Their creation, the R-Type Continental of 1952, caused a sensation. With its sleek bodywork by H.J. Mulliner and ability to cruise all day at 100mph, it was hailed as the ultimate grand touring coupé. H.J. Mulliner’s later Continental Flying Spur extended the Continental formula with the added practicality of four doors.

A four-door Continental
Given the success of the R-Type Continental, Bentley continued to offer a Continental driveline and chassis following the launch of the new S-Series in 1955. H.J. Mulliner, Park Ward, James Young, Hooper, Graber and Franay all produced their own two-door designs upon the chassis, but it was H.J. Mulliner that first produced a four-door, the Continental Flying Spur.

Heraldic inspiration
The new four-door was named by Arthur Talbot Johnstone, H.J. Mulliner’s Managing Director, after the heraldic device of his family, the Clan Johnstone of the Scottish Borders. The first example actually featured the Clan Johnston’s spur mascot on its radiator grille. Following the success of the H.J. Mulliner Flying Spur, other coachbuilders offered their bespoke interpretations of a four-door Continental. Of a total production of 432 S1 Continentals, H.J. Mulliner created the coachwork for 217 models.

The Bentley Collection’s S1 Flying Spur
The S1 Continental Flying Spur in Bentley’s Lineage Collection is a 1958 H.J. Mulliner model with the 180bhp 4.9 litre straight-six engine, finished in black with grey interior. It would have cost £8034, around ten times the average UK salary at the time. This example has the optional automatic gearbox and air conditioning, and even today is capable of covering long distances in great comfort. It’s a grand tourer in the Bentley tradition, and an inspiration for the design team that created today’s Flying Spur.

S1 Continental Flying Spur Facts:
• The S1 Continental was produced at Crewe as a bare driveline and chassis for independent coachbuilders to create the bodywork.
• Just 432 S1 Continentals (2 and 4-door) were produced: H.J. Mulliner bodied 217 of them.
• The name Flying Spur was inspired by the heraldic device of the Clan Johnstone. It was the brainchild of Arthur Talbot Johnstone, H.J. Mulliner’s Managing Director.
• At £8034, the 1958 S1 Continental Flying Spur was approximately ten times the average UK salary. In today’s terms that would equate to £265,000.
• The S1 Series Bentley was the last to use the 180bhp 4.9 litre straight six engine. In 1959 it was replaced by a 6320cc V8, ancestor of the engine that powers today’s Mulsanne.
• The S-Series was the last Bentley to feature a separate chassis. A coachbuilding era came to an end with the arrival of the unitary-bodied T-Series in 1965.
• H.J. Mulliner was the first coachbuilder to offer a four-door Continental, the Flying Spur. Other coachbuilders such as Park Ward, James Young and Hooper followed suit.
• An automatic transmission and air conditioning were both optional with the S1 Continental. With the arrival of the S2, an automatic transmission became standard.