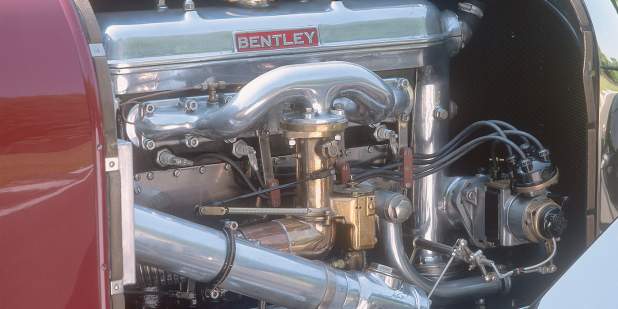 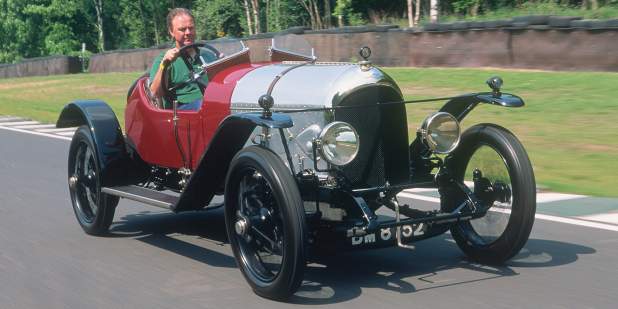 The 3-Litre represents W.O. Bentley’s original vision of ‘a fast car, a good car, the best in its class’ brought to life. It stayed in production from 1921 to 1929 and won countless races, including the 24 Hours of Le Mans in 1924 and 1927. A highlight of the company’s heritage collection is EXP 2, the second experimental Bentley 3 Litre. This is the oldest surviving Bentley and the first to win a race.

‘A fast car, a good car…’
W.O. Bentley’s reputation as an engineer was forged before WWI when the French-made DFP in which he competed achieved a number of class wins in races and hillclimbs. W.O. was one of the first engineers to realise the performance advantages of aluminium as a piston material; this gave him a competitive advantage when racing the DFP and led to his wartime commission to design the Bentley Rotary 1 and 2 fighter aircraft engine.

Discharged in 1919, Captain W.O. Bentley M.B.E set about creating the car that he’d been dreaming of throughout the long years of war. His experience of aircraft engines and their imperative for power with endurance had given him an excellent grounding; he was also influenced by two pre-war engine designs, the 1914 Grand Prix Mercedes and the 1913 Coupe de l’Auto Peugeot.

Bentley’s 3 Litre monobloc engine featured four valves per cylinder, twin spark plugs, twin magnetos and made extensive use of aluminium and magnesium; an advanced specification for 1920, particularly for a road-going car. Like every Bentley since, the 3 Litre engine developed generous amounts of torque from low rpm, was durable, strong and capable of high performance. EXP 1 received a glowing test drive report in The Autocar from pioneer motoring journalist SCH ‘Sammy’ Davis: “For the man who wants a true sporting type of light-bodied car for use on a Continental tour – where speed limits are not meant to be observed – the 3 Litre Bentley is undoubtedly the car par excellence.” Meanwhile its stablemate EXP 2 made its debut at the 1919 Olympia Motor Show, though due to the late arrival of some engine components it was a static display model.

Development of EXP 2
The new Bentley 3 Litre attracted a lot of interest from the Brooklands set. But it wasn’t until September 1921 that the first production Bentley 3 Litre was handed over to owner Noel van Raalte, by which time the rolling chassis price had increased from £750 to £1100. Between the 1919 Olympia Show and 1921 much work was needed to improve refinement. As W.O. later wrote, “I hate noise for the sake of noise. 70mph in silence is far more creditable than a noisy 80mph.”

As a development ‘mule’ EXP 2 at first featured a plain 2-seater body but was rebodied in March 1921 with a sporting, dark red body and aluminium bonnet crafted by coachbuilders JH Easter of Chagford Street. It first raced at Brooklands on Saturday May 7th 1921 with Bentley works driver Frank Clement at the wheel but was unplaced. EXP 2 notched up Bentley’s first-ever race win (the Whitsun Junior Sprint Handicap) at Brooklands on Monday May 16th. It was used by the company for testing and further motor races throughout 1921 and 1922, before being sold to lorry manufacturer E.R. Foden on 7th September 1923.

Production 3 Litre models
Production of the 3 Litre was slow at first but Bentley’s order books were soon packed with the names of wealthy and aristocratic clients, including Prince George (later the Duke of Kent), the Prince of Wales (Edward VIII) and the Duke of York, later King George VI. The 3 Litre remained in production until 1929, and models included the standard wheelbase Blue Label (for which Bentley literature claimed “with four passengers it is guaranteed the machine will lap Brooklands at 75mph”), Red Label Speed and 100mph Green Label models.

As was usual with prestige car makers during the 1920s and 30s, Bentley supplied the engine, drivetrain, suspension and chassis, leaving the choice of bodywork for the client. Some customers chose heavy, enclosed four-seater bodies which sapped the performance of the 3 Litre, and this trend prompted W.O. to develop the six-cylinder 6 ½ Litre Bentley. Other models produced at Cricklewood during the 1920s included the 4 ½ Litre, Speed Six and 8 Litre.

However as a sporting open tourer the 3 Litre was well in advance of its rivals, offering continent-crossing speed and stamina. It remained the mainstay of the Bentley range in production volumes until 1927.

The 3 Litre in competition
EXP 2 led the way with its debut win at Brooklands in 1921 and countless victories followed for production 3 Litre models. One owner, adventurer John Duff, decided to enter his 3 Litre in the newly-announced 24 Hour race at Le Mans in 1923. At first W.O. wanted nothing to do with the entry, declaring: “I think the whole thing is crazy. Cars aren’t designed to stand that sort of strain for twenty-four hours.” Fortunately Duff was a persuasive man, and at the last minute W.O. Bentley travelled to La Sarthe to watch the ‘crazy’ race. Duff and Bentley works driver Clement set the fastest lap and finished fourth, despite losing time with a hole in the petrol tank. The following year, 1924, Duff and Clement returned with the full support of Bentley Motors and won Le Mans outright. Duff also set 21 world records in 24 hours in 1925 at the wheel of a Bentley 3 Litre.

‘Old Number 7’
The most famous of all Bentley 3 Litre victories came at Le Mans in 1927, when both leading Bentley 4 ½ Litre works cars were eliminated at 9.30pm in a serious crash at the White House corner. SCH Davis, driving a Bentley 3 Litre, was also involved in the crash but managed to keep going despite a twisted chassis, bent front axle and damaged steering. Together with his partner Dr JD ‘Benjy’ Benjafield the two men managed to nurse ‘Old Number 7’ throughout the remainder of the race to a famous victory. At the Savoy celebration dinner the toast ‘to someone who should be present’ was proposed as the battle-scarred Bentley was wheeled into the dining room as a guest of honour. This tradition was revived in 2003 when the Bentley Speed 8 was the guest of honour at the Le Mans victory dinner.

EXP 2 today
EXP 2 was given a complete rebuild during the 1990s, restoring it to the original 1921 race-winning specification. Since being acquired by Bentley Motors it has resumed the role of ‘company demonstrator’ it first performed in the early 1920s. When not on show in the Crewe Lineage exhibition it has been a centrepiece of the World of Bentley in Shanghai, has carried Bentley guests around the Yas Marina circuit in Abu Dhabi and has also taken part in The Quail Rally and Pebble Beach Concours d’Elegance in California. Fast approaching the end of its first century, EXP 2 is as ready for action as ever.

Bentley 3 Litre Facts:
• EXP 2 is the oldest surviving Bentley and the first to win a race
• Embodiment of W.O. Bentley vision: ‘a good car, a fast car, the best in its class’
• Now owned by Bentley Motors and still driven throughout the world
• Displayed at Pebble Beach in 2009 when Bentley was the featured marque
• Won Whitsun Junior Sprint Handicap) at Brooklands on Monday May 16th 1921
• Total of 1,622 3 Litre models were produced between 1921 and 1929
• Blue Label, Green Label and Red Label refers to the badge enamel colour
• Advanced specification included four valves per cylinder and two spark plugs
• The 3 Litre Bentley won Le Mans in 1924 and again in 1927 when ‘Old Number 7’ survived to the finish despite heavy damage
• Many aristocratic and wealthy clients including Duke of York, later King George VI
• Autocar Journalist SCH ‘Sammy’ Davis was first to review Bentley 3 Litre and later won Le Mans 1927 at the wheel of Old Number 7