Bentley Bentayga demonstrated its outstanding performance credentials by claiming the outright record for a production SUV at the Pikes Peak International Hill Climb on Sunday 24th of June, 2018 in Colorado, USA.

Bentley’s Member of the Board for Sales & Marketing, Chris Craft, commented:
“This record proves the outstanding dynamic ability of the Bentayga – demonstrating again how Bentley Motors is the only automotive company in the world that can combine pinnacle luxury and breathtaking performance. Congratulations to all at Bentley Motorsport and to Rhys Millen and his team.”

Speaking immediately after his run, Rhys Millen commented:
“What an incredible machine. To take a luxury SUV with minimal modifications and be able to drive up this course in under 11 minutes is a huge testament to the performance and level of engineering in the Bentayga. I had a great run – the car was planted all the way up and gave me the confidence I needed to push hard. I’m delighted to take the SUV record for Bentley and for everyone that’s been involved in this project.”

Only minimal changes were made to a standard production Bentayga in order to comply with the rules. The front seats were replaced with racing versions while the rear seats were removed, and a roll cage and fire suppression system were installed. Tyres were selected from Pirelli’s DOT-marked range, and a production-specification Akrapovic sports exhaust was fitted.  In every other way, the Pikes Peak car is a standard Bentayga, finished in eye-catching Radium Satin paintwork accented by the all-black chrome and carbon fibre body kit provided by Bentley’s Black Specification.

For this unique challenge of performance, speed and precision, Bentley has once again partnered with Mobil 1, who provide engine oils for the Bentley range. With the stresses of full-load performance at high altitude, only the highest quality engine oil protects the engine and allows it to perform faultlessly, delivering the power that Millen needed to break the record. The record breaking Bentayga's engine was filled with the same Mobil 1 oil used across the Bentayga range.

Build your own Bentayga 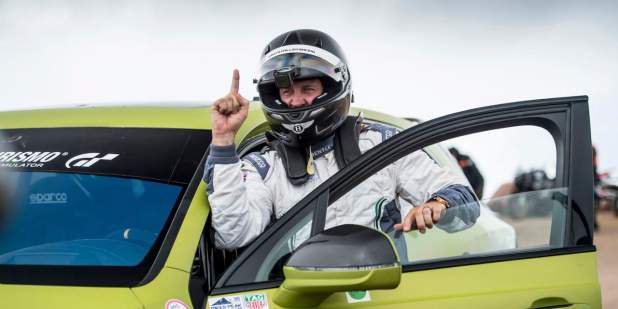 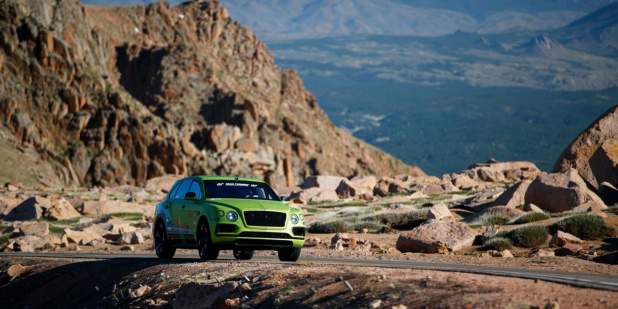 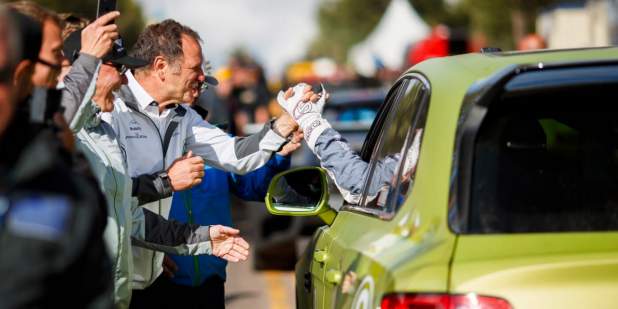 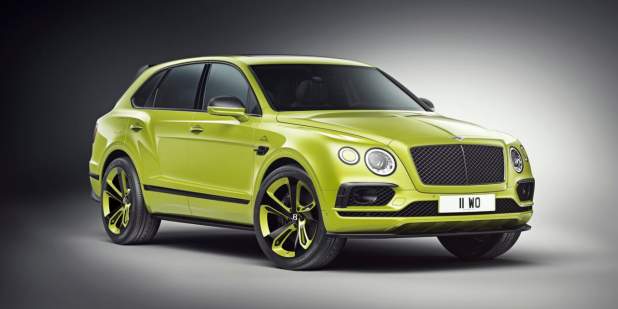 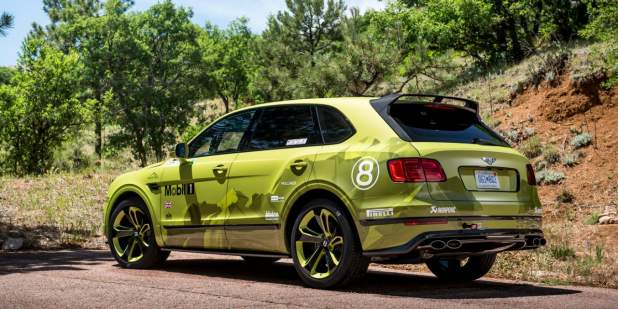 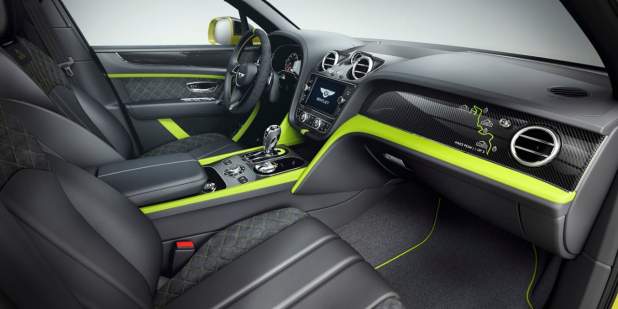 Striking Limited Edition Bentayga celebrates new record
To celebrate the record-breaking run, Bentley has created a new limited edition Bentayga, strictly limited to just ten cars. Created and handcrafted by Mulliner - Bentley’s in-house bespoke and coachbuilding division – the Pikes Peak Bentayga is an homage to the achievements of Bentayga on the mountain.

The Pikes Peak Bentayga features of number of eye-catching elements. The exterior is finished either in deep Beluga black paint or striking Radium, with 22” wheels in a bespoke two-tone finish of Beluga with Radium accents. The Black Specification is included, replacing all exterior chrome with gloss black components and adding a carbon fibre splitter, side skirts, diffuser and rear spoiler. A subtle Pikes Peak motif adorns the front fenders.

Inside the car, a Mulliner Design Colour Split marries Key Lime accents with Beluga leather, with Alcantara inserts to the seats and doors. The steering wheel and gear lever are also trimmed in Alcantara, and the headlining is technical Eliade cloth. A Pikes Peak logo decorates the carbon fibre fascias, and numbered Pikes Peak treadplates complete the interior.

The Pikes Peak Bentayga will be available to order from August for customers in the US and Europe.