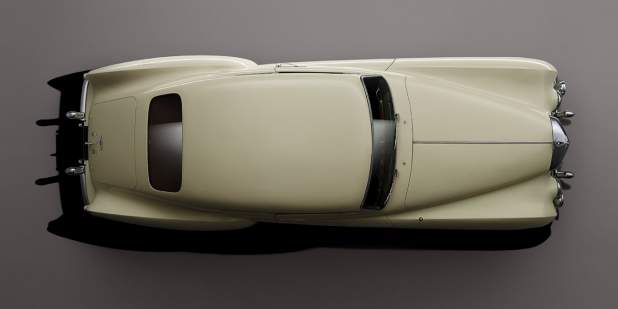 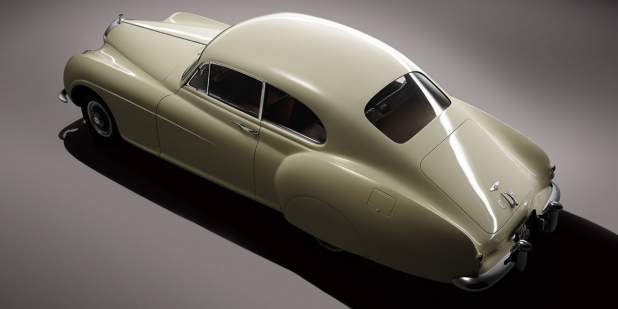 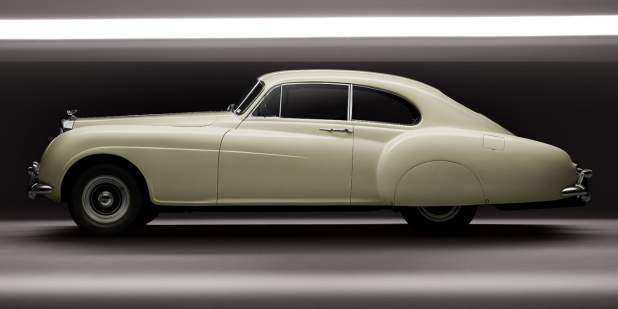 Reinventing Bentley
Pre-war, two coachbuilt specials had shown what a Bentley of the future might be. Both the ‘Embiricos’ Bentley and the Corniche featured streamlined bodies and were capable of cruising at high speeds on the fast roads of the continent. One man who took careful note of these one-off creations was the company’s chief projects engineer, Ivan Evernden. Although a lifelong Rolls-Royce employee, he was inspired to reinvent Bentley for the post-war world and distance it from its more staid cousin.

He was assisted by John Blatchley, chief of the newly-created styling department at Crewe, who sketched a low, long and lithe body shape, with its radiator inclined backward from the vertical, a steeply raked windscreen, rear wheelspats and a fastback roofline. Fins were added to the rear wings to aid stability at high speed. A quarter-scale model was made and tested in the company’s aero-engine division’s tunnel at Hucknall, in Nottinghamshire. Evernden estimated that air speeds of up to 120mph were attainable. “Much more could have been done” he wrote in July 1962, “…but the purpose of the exercise was to reduce the aero drag of a conventional car and not to make a space capsule for an astronaut.”

Creating the R Type Continental
Using the R Type chassis as a base, Evernden and Blatchley designed a grand tourer in the Bentley tradition, using aerodynamics and lightweight construction to create a vehicle capable of running for long periods at high speed across Continental Europe. It became an icon of its era; beautifully crafted, fast and exclusive.

Mechanically, the standard 4,566cc, six-cylinder in-line engine was gently tuned, raising the power from 140 to 153bhp, with a higher final drive ratio to take advantage of the lighter, more aerodynamic body.

Coachbuilders H.J. Mulliner were tasked with creating the new, streamlined Bentley coupé. To save weight, the bodywork was made in aluminium, as were the window frames, the windscreen surround and the backlight. Even the seat frames and bumpers were aluminium. To pare weight to a minimum, a radio was considered superfluous.

Weight was the critical factor; tyres that could carry a two-ton motor car at speeds of over 115mph didn’t exist in 1950. Evernden calculated that if the new grand tourer were to cruise at 100mph or more, it would have to weigh a maximum of 34 cwt (around 1750 kilograms). Even so, this combination of weight and speed was right on the limit for the specified Dunlop Medium Distance Track tyres.

All the hard work paid off. In September 1951, at the Montlhèry track near Paris, the sleek new Bentley averaged 118.75 mph over five laps, with a best lap speed just under 120mph.

Production approval
Up to this point the prototype - OLG 490, nicknamed Olga – was a semi-official project. Some on the board of directors felt it was ‘too sporty’ for a company that also made Rolls-Royce limousines. But with the help of allies within the company and its overseas dealerships, Evernden persuaded the board that a market existed for a coachbuilt Bentley grand tourer. As he had hoped, orders came in from all over the world, even at the immense price of £6,928 including UK purchase tax. To put this in context, in 1952 Britain the average annual salary was £468, and the average house cost £1891.

Many owners specified extras, which had an impact upon the weight of some models produced during the R Type Continental’s three years of production. A bigger bore engine with a capacity of 4,887cc maintained the performance, with a practical top speed of around 115mph and easy cruising at 100mph. Later production cars also differed from ‘Olga’ in having a lower roofline, a one-piece windscreen and revised wing line.

By the time production ended in 1955, 208 R Type Continentals had been built. All but 15 of them were bodied by H.J. Mulliner.

A modern magic carpet
Accolades followed the launch of the R Type Continental. The Autocar summed up its appeal; “Whatever memorable motoring experiences one may have had, this was something different…this Bentley is a modern magic carpet which annihilates great distances and delivers the occupants well-nigh as fresh as when they started.”

R Type Continental Facts:
• Inspired by the pre-war streamlined Embiricos and Corniche one-off coachbuilt Bentleys
• Unofficial project by engineer Ivan Evernden to re-establish Bentley as a maker of high performance cars
• Design created by chief stylist John Blatchley and tested in a wind tunnel
• Built using aluminium to a target weight of 1750kg: no tyre existed in 1950 which could sustain a heavier weight at 115mph+
• Prototype OLG 490 was created by coachbuilders H.J. Mulliner: became known as ‘Olga’
• At Montlhèry in September 1951 ‘Olga’ averaged 118.75 mph over five laps, with a best lap speed just under 120mph
• Originally offered with a tuned, 4,566cc, six-cylinder in-line engine producing 153bhp. Later versions 4,887cc
• To save weight, a radio was not fitted as standard
• Total of 208 produced between 1952 and 1955 – 193 were bodied by H.J. Mulliner
• Cost in 1952 was £6,928 including UK purchase tax: almost fifteen times the UK average annual income
• Later production cars featured a lower roofline, a one-piece windscreen and revised wing line